The German economy: safe inside, riskier outside

The German economy has changed its growth model during recent years. While internal demand (especially private consumption) – was sluggish and weak throughout most of the 2000s, it is currently the most important driver for growth. In contrast, net exports, which have been so important for German economic growth in the past, were relatively neutral in terms of growth performance in 2015. Moreover, net exports are likely to dampen GDP growth this year, due to weaker export growth and strong ongoing growth in imports. Nevertheless, thanks to the country’s robust internal demand, Coface forecasts GDP growth of 1.7 % for this year.

Higher exports risks for German companies are hampering the improvement of growth performance. As Germany has strong trading ties with the Emerging Market and Developing Economies group (EMs), it is highly exposed to the structural and cyclical weaknesses within these economies. These external impacts are currently negative, as growth in exports to EMs has been cooling down and is now much weaker than demand from Advanced Economies.

From a sectorial perspective, some of Germany’s key sectors are particularly vulnerable to risks stemming from EMs. Coface evaluates the most significant risks as being in the Automotive and Mechanical Engineering sectors and for Electrical Equipment. In addition, risks from EMs are also materialising in the cyclically-sensitive chemical industry. 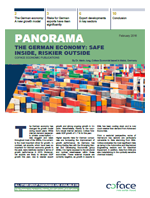 Download this publication : The German economy: safe inside, riskier outside (773.80 kB)