Despite five years of “Modinomics”, India continues to be constrained by economic fragilities

When Narendra Modi ran for Prime Minister in 2014, he pledged to boost the competitiveness of India’s industrial sector to promote growth.

Five years later, the economy is in a better position, but many of the structural fragilities that Modi inherited continue to afflict India today. In particular, a mixed track record in terms of executing three crucial economic reforms has dampened enthusiasm for Modi: the new insolvency and bankruptcy code, demonetisation, and the introduction of a harmonised goods and services tax. India will host its next general election from April 11 to May 19, with Modi running again.

Assuming he manages to secure enough votes to win a simple majority, the 17th Lok Sabha (Parliament) will likely be a more fragmented one, which could slow India’s reform process.

The incoming administration will have to focus on cleaning up the banking sector as well as boosting employment to support India’s burgeoning workforce. Achieving this while simultaneously promoting macroeconomic stability will likely prove challenging. 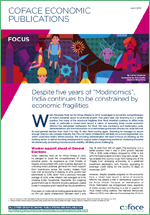 Download this publication : Despite five years of “Modinomics”, India continues to be constrai... (648.48 kB)