Two years after the onset of the pandemic, the global economy continues to recover, but still faces significant challenges. After the relative lull of the third quarter, the emergence of the Omicron variant and its rapid spread to every region of the world has highlighted the unpredictability of the pandemic, despite the progress in vaccination. Consequently, the health situation has once again required the implementation of new restrictions this winter in a majority of countries. However, while some European countries have introduced partial lockdowns, the measures overall have been much less drastic in most countries than during previous waves. As a result, the direct effects on economies are becoming less significant with each additional wave, although the consequences remain particularly negative for directly affected sectors such as air transport, tourism, hotels and restaurants. In other words, the world has learnt to live with the pandemic.

Nevertheless, this new wave has exacerbated one of the main factors affecting the global recovery: supply-chain disruptions. After initially affecting the automotive industry, supply difficulties have spread to most of the manufacturing and construction sectors, remaining particularly acute in early 2022. While the time of return to normality remains hard to predict, it seems that the consensus – which we shared until very recently – of a progressive easing starting in H1 might be too optimistic: supply-chain disruptions are unlikely to be solved by next summer, even if pressures from the pandemic will certainly ease with the return of sunny days. Therefore, the other major risk highlighted in our previous Barometer, namely a lasting inflation slippage, is also becoming increasingly significant, especially as the commodity price rally, fuelled by the short-term inertia of supply and geopolitical tensions, is going the extra mile. Still sustained by energy prices, inflation is now firmly rooted in manufacturing prices in many (advanced) economies, as companies pass on increases in production costs to consumer prices. However, it should be noted that inflation dynamics are not uniform across countries: while core inflation is very high in the United States and the United Kingdom, it remains subdued in most Eurozone countries, where underlying inflationary pressures remain on average quite muted. Such heterogeneity obviously results in diverging monetary policies between both sides of the Atlantic (and the Channel!), which is already having a substantial impact on financial markets and will, in all likelihood, further affect international capital flows. Indeed, while the ECB remains in a wait-and-see stance and has announced that its asset purchases will not stop in the near future, the Bank of England already increased rates in December. Surprised by the recent surge in inflation and blamed by most observers for being behind the curve, the Fed has suddenly pivoted and hinted that a rate hike is imminent, with more to come throughout the year, prompting monetary tightening in some emerging countries – especially those facing downward pressures on their foreign exchange rate and significant external financing needs. China appears to be an exception in this context, as public authorities have decided to ease monetary policy in order to provide some breathing room to the real-estate sector and stabilize its economy, whose slowdown might turn into some kind of hard landing.

In the fourth quarter of 2021, given a still very uncertain environment, Coface has made few changes to its risk assessments, following the waves of upgrades in the previous quarters. In total, four country risk assessments were upgraded, including Denmark (A1), and two were downgraded. In terms of sector risks, Coface upgraded twelve assessments, notably in the paper and wood industries, where prices remain buoyant, and made five downgrades, mainly in the energy sector in Europe, where suppliers are particularly affected by the surge in prices. 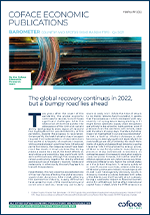