No improvement in Asia Pacific corporate payments in 2015

Coface’s annual survey traces the evolution of corporate payments in eight countries and 11 sectors in the Asia-Pacific region. The survey was conducted in Australia, China, Hong Kong, India, Japan, Singapore, Taiwan, and Thailand, with 2,793 respondents.

In India, 84% of respondents faced overdue issues. There was a marked increase in respondents (32% vs. 24% in 2014) with more than 2% of their annual sales involved in ultra-long overdue issues. The problem of non-performing assets is likely to reduce the lending capacity and profitability of banks – which means that some companies could suffer from tightening bank credit controls. The slower than expected implementation of reforms is clouding the medium term outlook.

China’s overall corporate payment experience remained weak, with 80% of respondents reporting overdues in 2015. Over 20% noted average overdue times of more than 90 days, the highest among the countries surveyed. In addition to the unsolved issues of high leveraging and overcapacity in many sectors, downwards pressure on the RMB and stock market volatility are further concerns for the Chinese market in 2016.

Singapore also saw a sharp increase in respondents (35% vs. 23% in 2014) with more than 2% of their annual sales involved in ultra-long overdue issues. In addition, more companies (14% vs. 10% in 2014) reported average overdue times of more than 90 days and increases in overdue amounts (49% vs. 35% in 2014). Singapore, as the Asian base for the world’s leading commodities companies, is now also facing low commodity prices and mounting global uncertainties.

“Asian companies have been facing significant financial stress from overdues, compounded by the squeeze on profit margins due to industrial overcapacity, soft demand and steeper business competition in recent years. It is not expected that the situation will improve in 2016,”said Jackit Wong, Asia Pacific Economist of Coface.

Company payment experience remained fairly stable in Japan and Abenomics appear to be losing steam. This is evidenced by the weaker cyclical indicators from retail sales, industrially produced exports in the first quarter and the 0.3% year-on-year decline in the core consumer price index. Coface remains cautious and expects the Japanese economy to grow by 0.5% in 2016, the same as in 2015.

Companies in Hong Kong adopted a more prudent approach to credit in 2015, with fewer respondents offering sales on credit (69.4% vs. 76.8% in 2014) and a slight decrease in average credit terms. As a result, overall company payment experience has stabilized. With the continued growth of economic integration between Hong Kong and China, it is widely expected that any economic ‘shock’ from China has an impact on Hong Kong’s economic growth. Hong Kong’s externally-oriented economic growth is expected to slow to 1.5% in 2016, down from 2.4% in 2015.

Taiwan’s overall company payment experience improved. Fewer respondents (11.8% vs. 21.2% in 2014) reported average overdue times of more than 90 days and there was a clear fall in the percentage of companies (10.2% vs. 15.1% in 2014) with over 2% of their annual sales involved in ultra-long overdue issues. Economic recovery in the US and the Eurozone will probably mitigate the adverse impacts from China on Taiwan’s highly export-dependent economy. Coface expects a modest improvement in economic growth in 2016, at 1.2% compared to 0.8% in 2015.

Overdue issues intensifying in SOME sectors

Construction was the most at-risk sector in the Asia Pacific region in 2015. This segment reported the most companies with sales impacted by ultra-long overdues. Construction companies also saw an increase in average overdues of more than 90 days and in overdue amounts. The outlook for the construction sector in 2016 is likely to remain weak. Headwinds originating from the economic slowdown in China (the region’s largest economy), combined with structural reforms and uncertainties around the timetable of the US rate hike, are likely to weigh on the region’s economic outlook, dampening sentiments for both private investment and consumer home purchasing. However, the continuing environment of low (if not lower) interest rates in the region could somewhat bolster purchasing intentions. Ongoing public infrastructure projects could also provide a cushion to the construction sector.

Industrial machinery and electronics had the highest percentage of respondents (78% vs. 70% in 2014) experiencing overdue issues in 2015. This year is likely to remain difficult. The industrial machinery segment is pro-cyclical and demand will probably remain dormant, due to sluggish trade growth, China’s economic re-balancing towards services, and weak capital spending against the backdrop of the ‘Japanization’ of the global economy. At the same time, slowing inflation (if not deflation) will probably cause stress on prices, squeezing profit margins. As a result, it would not be surprising to see some companies within this segment resorting to the defensive strategy of mergers and acquisitions (M&As) to strength their market power.

The automotive and transportation sector saw a worrying deterioration in overdue issues during 2015 compared to 2014. More companies reported an increase in overdue amounts (35% vs. 31% in 2014) and suffered from ultra-long overdue issues (23%, vs. 14% in 2014). However, demand will probably benefit from the rise in the middle income class and the regional environment of low interest rates. A boost in Chinese demand, emanating from temporary tax cuts on vehicles with engines of 1.6 liters or less, will probably add some energy to the sector this year.

There were no improvements for the metals sector in 2015. The outlook for 2016 is negative, stemming from subdued Chinese and global demand, significant overcapacities, and low prices amid market disequilibrium. Restructuring in this sector is likely to kick start in 2016, commencing with the closure of zombie steel companies in China and the rise of M&A activities. 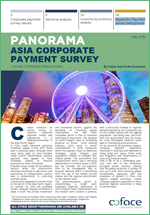 Download this press release : No improvement in Asia Pacific corporate payments in 2015 (576.97 kB)