At the beginning of the year, the Swedish economy was set for yet another year of dynamic growth, still recovering from the downturn of the pandemic. However, the Russian invasion of Ukraine changed this outlook dramatically. The EU sanctions against Russia and Belarus have only a small direct impact on the Swedish economy. In 2021, only 1% of all Swedish imports came from Russia and only 1.3% of its total exports went to it. The main impact comes instead from the export blockades, supply chain issues and lower supply of energy, which lead to the strong increase in global prices, especially for energy and food. This pushed the yearly inflation rate in Sweden up to over 8% (and could even go higher), its highest level since 1991. The price pressures are eroding the purchasing power of private households. In 2021, their consumption had already grown faster than their disposable income, which ate up some of their savings built during the first year of the pandemic. Furthermore, Swedish households invest a lot into financial markets, which have deteriorated lately. Together with rising interest costs, this will reduce their financial room for manoeuvre. Some support is coming from the government, which temporarily reduced the tax for fuels between June and October 2022. In addition, compensatory payments for car owners and for electricity - in certain areas - have been introduced. Another stabilizing factor is the good shape of the Swedish labour market. The unemployment rate is still decreasing and has almost reached the pre-pandemic level. This gives the employees a better position when asking for higher wages. Nevertheless, this should not prevent household consumption from slowing down, or even declining. To stabilize inflation expectations, the Riksbank has increased its policy rate by 75 basis points between January and July. For the rest of the year, more rate hikes - for a total amount of 125 basis points - are in the pipeline, with further to come in 2023, however in smaller steps. Furthermore, the Riksbank will reduce its asset holdings faster than formerly announced in the second half of the year. The sharply rising interest rates also caused trouble for private homebuilders with variable mortgages, as most mortgage contracts in Sweden are with variable interest terms. Since autumn 2021, house prices have been decreasing, as less people can afford them. Due to the shortage of labour and construction material, the construction costs increased noticeably in the last years. Construction activity should therefore stabilize over this year instead of growing. Additionally, foreign trade will be slightly less favourable. Goods exports should increase at a slower pace due to supply-chain issues, trade-barriers and lower external demand. Nevertheless, foreign tourists should come back stronger this summer. While private investments should remain muted over the second half of 2022, some support will come from public investment as the government decided to implement a “reform package” of SEK 74 billion (0.9% of GDP) this year that includes investments into climate transition, digitalization and the strengthening of the welfare system. Some of these measures are combined with the EU Recovery and Resilience Facility that includes disbursements for Sweden, worth 0.2% of GDP.

Almost back to a twin surplus

The country’s current account surplus should shrink slightly this year, as the decrease in the trade in goods surplus, linked to costlier imports, will not be balanced out by a higher trade in services surplus combined with higher investment revenues from abroad. The general government budget balance will remain in a small deficit due to the slowdown of the economic growth dynamic and higher defence expenditures, as well as stronger household support measures planned. Still, the public debt should decrease further and remain very low.

The Social democrat Magdalena Andersson is the first female Swedish Prime Minister. She succeeded Stefan Löfven, towards the end of his four-year term that had started in 2018, after his centre-left-minority government broke apart in November 2021. He stepped down after months of coalition fights and made room for his party colleague and former Finance minister Magdalena Andersson. Since then, Andersson is leading a social democratic minority government (the Social Democratic Party, SDP, has 100 seats out of 349 in the parliament). The government is passively supported by the social-liberal Centre Party (31 seats), the Left Party (27 seats) and the Green party (16 seats). The Russian invasion of Ukraine brought the first touchstone for the new government. Geopolitically, Sweden has a long tradition of neutrality since the 19th century. Therefore, Sweden is one of the six EU countries that are not part of the NATO, but has had close relationships with the organization. Since the beginning of the invasion, the public opinion changed from favouring neutrality to joining the NATO (parallel to the situation in Finland).

Therefore, Sweden officially applied to join the organization on 18 May  2022 and NATO signed the accession protocol in early July 2022. Still, all NATO members’ parliaments have to confirm this step, which could take up to a year. The confirmation is quite certain, once Sweden finds a deal with Turkey (Sweden will lift its arms embargoes on Turkey and toughen their laws against Kurdish militant activists that Turkey sees as terrorists), which opposed this move at first. To avoid further escalation in the geopolitical tensions between the Nordic countries and Russia, Finland and Sweden announced that they would not host NATO bases or nuclear weapons on their territory. The next general election will take place on 11 September 2022. Andersson’s SDP is clearly leading in the polls by 11 points ahead of the next party. Therefore, Andersson could remain in her office and build another centre-left coalition.

Bills of exchange and promissory notes are neither widely used nor recommended as they must meet a number of formal requirements in order to be considered as legally valid.

Just as the rules for issuing cheques have become more flexible, the sanctions for issuers of uncovered cheques have been relaxed over the years. The use of cheques has subsequently become almost non-existent.

Conversely, use of the SWIFT electronic network by Swedish banks provides a secure, efficient, and cost-effective domestic and international fund-transfer service. Payments are dependent on the buyer’s good faith. Sellers are advised to ensure that their bank account details are correct if they wish to receive timely payment.

Direct debits represent about 10% of non-cash payments in Sweden and are quickly growing in popularity. There are two types of direct debit in Sweden: Autogiro Foretag (AGF) for B2B transactions and AutogiroPrivat (AGP) for B2C payments. They can both be used for single or recurring payments.

Amicable settlement aims to recover the debt without transferring the case into a trial procedure. The debtor is informed (either orally or via writing, with written correspondence being preferred) about the debt, the payment deadline, and the consequences of not paying the debt. If debtor agrees to pay the debt, both parties may settle on instalment payments through an official document that sets out the contractual terms of the agreement.

When there is no specific interest clause in the contract, the rate of interest applicable since 2002 is the six-monthly benchmark rate (referensräntan) of the Central Bank of Sweden (Sveriges Riksbank), plus eight percentage points.

Under the Swedish Interest Act (räntelag, 1975, last amended in 2013), interest on damages is awarded from the 30th day following the day on which the creditor addressed a written claim for damages to the defendant, if the plaintiff so requests. In any event, interest may be awarded from the date of service of the summons application.

Where claims meet some basic requirements (e.g. payment is overdue, mediation was attempted), creditors can obtain an injunction to pay (Betalningsföreläggande) via summary proceedings through the Enforcement Service. The application has to be made in writing and clearly express the grounds of the claim. No further proof needs to be submitted.

This Enforcement Authority (Kronofog–demyndigheten) orders the debtor to respond within a period of ten days to two weeks. If the debtor fails to reply in time or acknowledge the debt, a verdict will be rendered on the merits of the original application.

While formal, this system offers a relatively straightforward and quick remedy in respect of undisputed claims, which has greatly freed up the courts. Creditors are not required to hire a lawyer but, in some circumstances, would be well advised to do so. On average, the process takes two months from application to decision. The decision is immediately enforceable.

If the debtor contests the debt, the creditor has the decision of either turning to the District Court (the first instance, Tingsrätten) or to terminate the process.

Proceedings involve a preliminary hearing in which the judge attempts to help the parties reach a settlement after examining their case documents, evidence and arguments. It is up to the parties themselves to decide what evidence they wish to submit.

If the dispute remains unresolved, the proceedings continue with written submissions and oral arguments until the main hearing, where the emphasis is on counsels’ pleadings (defence and prosecution) and examination of witnesses’ testimonies.

In accordance with the principle of immediateness, the court bases its decision exclusively on the evidence presented at the trial. Barring exceptional circumstances, the judgement is customarily issued within two weeks thereafter.

As a general rule, the Code of Civil Procedure requires the losing party to bear all legal costs considered reasonable, as well as the attorney fees incurred by the winning party beyond a given threshold claim amount (about SEK 23,800, approximately EUR 2,390).

It takes up to twelve months (in exceptional cases more) to obtain a writ of execution in first instance, bearing in mind that there is a widespread tendency in Sweden to appeal against judgements.

ENFORCEMENT OF A LEGAL DECISION

As soon as a domestic judgment becomes final, it is enforceable. If the debtor does not comply, the creditor can request the court’s enforcement authority to seize and sell the debtor’s assets.

For awards rendered in an EU member-state, special enforcement conditions are provided. When the claim is undisputed, the creditor may apply to the European Enforcement Order, or when the claim does not exceed €2,000, the creditor may start a European Small Claim Procedure. For awards issued in non-EU countries, the Svea Hovrät Court of Appeal must recognize an award in order to enforce it, provided that a recognition and enforcement agreement has been signed between the non-EU country and Sweden.

Swedish law does not formally regulate out-of court arrangements. Nevertheless, creditors and debtors can enter into voluntary negotiations in order to negotiate the debt and reach an agreement.

The aim of restructuring is to find a financial solution for an insolvent company that is deemed to have sustainable long-term business prospects. It can apply for a restructuring with the local court. If approved, the court will appoint a rekonstruktör to manage the restructuring. The latter will investigate the financial situation of the company, before establishing and implementing a restructuring plan under which up to 75% of the debt may be written off.

Bankruptcy proceedings are initiated as a consequence of a company becoming permanently insolvent. They aim to wind down an insolvent company by selling its assets and distributing any income to creditors. Either the debtor or the creditor can file a petition before the local court. After the court has declared a company bankrupt, it appoints an administrator that independently takes control over the company’s assets with the main task of realising such assets and repaying the debts of the bankruptcy estate in accordance with the creditors’ statutory ranking. 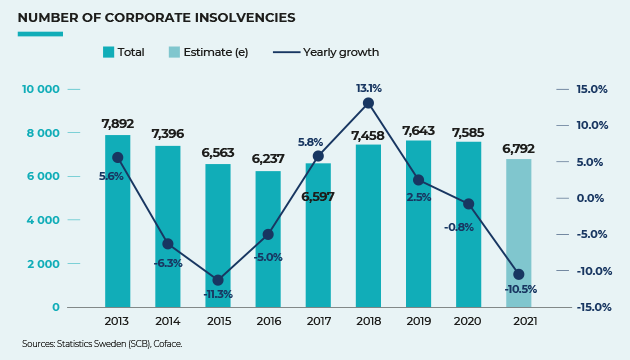