Race for market share in Africa: the European pack is catching up with the French breakaway

A few months later, the drop in oil prices extinguished all hope of achieving this objective and reduced the total value of trade (sum of imports and exports) between these two zones from 73 billion US dollars in 2013 to 54 billion USD last year. In 2017, France also lost its status of leading European supplier to Africa to Germany.

This observation symbolises the continued erosion of French companies’ market share in Africa: exports accounted for almost 11% of flows to Africa at the beginning of the millennium, but halved by 2017 (5.5%). The analysis of trade flows by sector in this study reveals that the loss of French infl uence is not only attributable to China: other major emerging countries, as well as some European neighbours, have entered the African market. If slowing French export performance –particularly in key areas, such as the automotive, pharmaceutical, and capital goods sectors– is not specifi c to trade with Africa, France’s sharp loss of market share is alarming. Although the activity of many countries in Africa is recovering from the impact of external shocks in 2016, this study also focuses on identifying markets where trade potential can be further tapped. In addition to the East and Southern African markets, with which trade flows are relatively weak, our analysis, based on a gravity model, also reveals that France’s export performance towards Algeria. 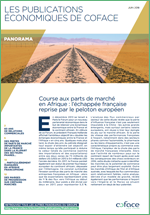 Download this publication : Race for market share in Africa: the European pack is catching up with... (2.46 MB)