Turkey’s economy grew substantially during the first three quarters of 2017, surging by 7.4% compared to a year earlier. During the third quarter, the economy expanded by 11.1% compared to a year earlier, the fastest growth among the G20 economies. This rise largely exceeded market expectations, especially considering the factors that negatively affected last year’s economic activity. This year’s growth has mainly been stimulated by government support, along with rising investments and exports. The recovery in private consumption has also contributed strongly to growth performance. Coface forecasts that the economy will expand by 6.5% in 2017 and 5.2% in 2018. 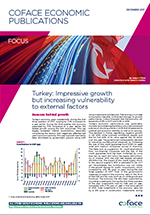