After five years of sanctions, Iran is finally to rejoin the global community. The return of Iran should have an effect on international growth through the oïl channel but above all, will bring huge changes to Iran itself. International sanctions have impacted the Iranian economy. Two consecutive years of negative growth and runaway inflation have tested Iran’s resistance model to its limit. The lifting of the EU embargo will allow Iran to revive its oil sector and return to the global market. The country is perceived as a new Eldorado, with its 78 million potential consumers. Moreover, with its huge oil and gas reserves, skilled labor force and strategic location, Iran is holding all the cards to become one of the top emerging economies during the next few years.

The lifting of sanctions, following the P5+1 agreement, will have a significant effect on raising Iran’s output. Coface expects real GDP growth to stand at 3.8% this year.

However, moving from autarky to openness is a sharp maneuver to manage. The country may face adverse effects from trade liberalization. The surge in capital inflows and increased oil exports could lead to an exchange rate appreciation that would be a hurdle to the competitiveness of non-oil exports. Indeed, fear of a ‘Dutch Disease syndrome’ remains present over the medium term.

The unfavorable global environment and structural problems may delay the gains expected following the removal of sanctions. The rebirth of the oil sector is likely to be slower than projected, due to the lack of investment and the downturn in the oil market. The low price of the oïl barrel may cost Iran 2.8% of its GDP if it remains unchanged (i.e. 33 USD/b).

Moreover, the country’s isolation, obsolete infrastructures and weakened banking system will challenge the positive dynamics of its reintegration into the global world trade market.

Nevertheless, there are sectors other than oil that will benefit from the lifting of sanctions such as the automotive industry which, prior to the sanctions era, was the largest car producer in the Middle East. 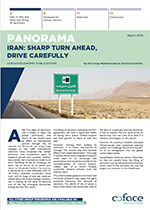