Corporate insolvencies fell by 3.3% in France during the first ten months of the year. After a difficult first quarter, due in particular to the repercussions of the “yellow vest” movement, they have been steadily declining since May 2019. As a result, the number of corporate insolvencies is expected to decline over the full year, for the fourth consecutive time. However, Coface expects a slight rebound of insolvencies in 2020 (+0.9%), for around 52,000 proceedings, mainly due to the expected slowdown in the construction sector that was largely driven by public works in 2019. The peak in activity, related to the run-up to the municipal elections, had thus led to a sharp drop in insolvencies in the sector, which accounts for more than a quarter of all insolvencies. Personal services and retail, which are dependent on consumption, have fully benefited from household purchasing power gains, thanks to the dynamism of the labor market and the tax measures taken by the government following the “yellow vest” movement.

On the other hand, while transport is still penalized by the increase in the number of insolvencies for taxi drivers and road hauliers, the automotive sector has seen an increase in the cost of insolvencies, despite a decrease in their frequency. This noticeable relative contradiction is explained by the difficulties encountered in 2019 by automobile equipment manufacturers, of which the weight is significant despite their limited number. More broadly, the first ten months of the year were marked by an increase in corporate insolvencies for companies that generated over EUR 5 million in revenue. In total, during this period, no fewer than six companies with a turnover above EUR 200 million initiated insolvency proceedings, mainly because of structural changes in the concerned sectors.

According to the very first survey conducted by Coface among industry executives, at the beginning of September 2019, French companies are relatively positive about the evolution of their cash fl ow in 2020. However, they are much less so regarding the French economy and, above all, the global environment. Half of the surveyed believe that their export activity will continue to be threatened mainly by trade tensions and geopolitical risks, much more so than by Brexit or a potential recession in the United States. Despite these risks, 2020 will also bring export opportunities, particularly towards the rest of the European Union, which is identified by companies in the sector as the most buoyant market next year, ahead of North America and Asia. 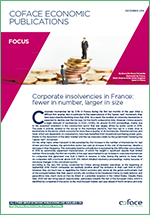