China is on the way to becoming an important financial player for economies with restricted access to international markets. This is clear in Latin America, where China has announced the intention to increase its investment stock in Latin America to $250 billion (USD) and to attain an annual trade flow of $500 billion within the next ten years. This announcement is good news for Latin America, which experienced a recession in 2015. The region saw a 0.6% drop in GDP in 2015 and is expected to show a marginal improvement in 2016 (-0.2%), according to Coface forecasts.

China is now the second largest source of Latin American imports, after the United States, and the third largest destination for its exports, behind the United States and the European Union. In 2014, Brazil, Mexico, Argentina, Colombia, Chile, Peru, and Ecuador, which together represented approximately 88% of the region’s GDP, exported $83.3 billion to China, against imports of $152.2 billion.

Brazil is China’s main Latin American partner in trade flow, representing approximately $78 billion in 2014. China is a major destination for Brazil´s exports, accounting for 18% of the country’s total exports, though in terms of total GDP it only represents 1.7%.

In terms of trade, Chile’s dependence on China is the highest in the Latin American region. In 2014, Chile sent 24.4% of its total exports to China, equal to 7.1% of its GDP. In contrast, Mexico tends to be the least impacted by lower Chinese demand and exports to China account for just 0.5 % of its GDP. For imports, however, Mexico is one of the region’s main destinations for Chinese products.

Latin America became a major supplier of basic products to China but was, in turn, invaded by cheap manufactured imports. Between 2009 and 2013, the five main products exported from Latin American and Caribbean countries (LAC) to China were commodities. These represented 71% of total exports from the region, while the five main Chinese exports to LAC accounted for 24% of the total. LAC exports are more concentrated and based on low added-value products, while China’s exports are more diversified, with higher added-value.

Coface forecasts Chinese GDP growth will continue to decelerate over the coming years, with 6.2% in 2016, down from 6.9% in 2015, and well below the annual growth average of 10% reported during the previous decade. Latin America appears to be one of the most affected regions in the world by the Chinese slowdown, particularly with regards to its trade and also because of the low prices of raw materials, which is also partly explained by a less dynamic China.

China may also suffer a decrease in its market shares due to losses in competitiveness, which can be explained by wages increasing above productivity and the appreciation of the Yuan over recent years. China’s rising labor costs over the last ten years have reduced the advantages of manufacturing in the country. For many years, China’s relatively cheap labor force helped to increase the competitiveness of goods, and it explains the strong increase in exports to Latin America. The situation has changed now, especially since China is not included in the Trans-Pacific Partnership, which aims to reduce trade barriers and promote trade between the countries involved.

An investor looking for opportunities

Over the years, China has extended its international presence to channels beyond trade. In particular, the country has increased its financial presence in Latin America and Africa. 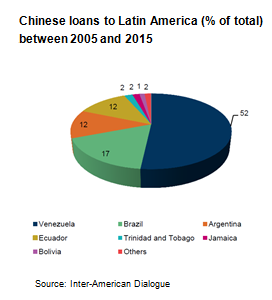 According to the Inter-American Dialogue, during the period from 2005 to 2015, China lent $125 billion (around 2.5% of regional GDP) to countries and enterprises in Latin America. However, China is still far from being Latin America’s major source of foreign direct investments (FDI) and represents roughly 6% of the region’s total FDI.

Chinese lending has especially helped improve infrastructure in Latam. Over the last decade, China invested more in the region’s domestic infrastructure than in any other economy. This has enabled engineering and construction companies to intensively develop their technological and logistical capacities.

Although China has announced significant investments in Latin America, its capacity to deliver is uncertain. China has also experienced disagreements with Latin American businesses and governments due to contract terms and environmental concerns.

China will continue to play an important role in Latin America’s near future, especially in terms of investments. Latin America, however, needs to work on guaranteeing investment reciprocity and to improving its understanding of China’s investment model.

Download this publication : China´s role in Latin America is much more than a trade issue (695.06 kB)