The "Panorama Sectors", a new quarterly publication of Coface, focuses on the sector risks in the world. The world economy is analysed by means of 14 business sectors in three large regions: emerging Asia, North America and the European Union. The analysis uses three original indicators – strength of turnover, financial robustness and credit risk – developed by Coface economists and drawn from the payment experience of companies observed and analysed by Coface underwriters.

Worldwide, credit risk varies noticeably according to business sector:- Pharmaceuticals, energy and transportation are resilient;- Agro-food, automobiles and electronics are to be monitored;- Conversely, construction, metallurgy and retail are weakened and exposed to a high credit risk.

Focus: China's steel industry has a favourable outlook but is fragile in the short term

« Globalisation requires a view of sectors that transcends country logic and takes into account the strategies of companies in the same sector, cost constraints linked to changes in raw materials, adaptation to major technological changes, and large displacements of demand towards emerging countries. For a credit insurer in the current crisis, the ability to identify and understand industry trends allows for better risk prevention. The analysis of this sectoral logic by Coface experts enriches our assessments of businesses and our ability to guarantee transactions», commented Jean-Marc Pillu, CEO of Coface.

Sectors organised into three categories according to the risk level

Penalized by the global economic slowdown and the less dynamic growth of international trade, numerous business sectors are currently under threat. Coface's experience shows that only a few sectors are experiencing an average level of credit risk.

Pharmaceuticals is benefiting from rising health spending. Energy takes advantage of its capacity to generate cash flow. Maritime and air transportation, although less robust on the financial level, is a moderate credit risk due to a controlled risk policy.

On the contrary, agro-food, automobiles and electronics are considered risky by the Coface experts. While the agro-food and automobile industries react differently according to geographical areas, electronics is a victim both of the Chinese economic slowdown and the European recession.

The outlook is particularly bleak for three business sectors: construction, metallurgy and distribution. Payment incidents are frequent and are evidence of a significant risk, particularly, in Southern Europe.
Construction is by its nature vulnerable to the economic climate of the regions. If in the US we may expect a slight upturn in activity, in Europe economic difficulties continue to affect households and public institutions, which are limiting their investments without hope of an immediate upturn. In China measures have been taken to deflate the housing bubble. The case of retail is different. Although the claims rate is changing positively, the sector is suffering above all from the contraction in household consumption in developed countries.

The steel industry is symbolic of the shift of demand and offer to emerging countries. In ten years, we have observed a move of steel production from Europe to Asia, now representing 65% of world production. At the same time, demand for steel has also shifted to emerging countries while European demand has dropped sharply. Indeed, the main client industries of steel are automobile (50%) and construction (12%), both experiencing difficulties in Europe.
China, now the largest producer and consumer of steel, has been hit hard by the contraction of activity in the country and its main trading partners, which has led to financial tension. In fact, the Chinese steel sector is characterised by overcapacity due to the presence of thousands of producers, making companies vulnerable to the current slowdown. Restructuring of the sector, led by the Chinese authorities, seeks to instigate a move in production to the upmarket segment to enhance the prominence of the country on the international steel market. According to Coface, while the restructuring process could result in a number of casualties among non-viable players in the short term, it will allow for the strengthening of the network of Chinese steel companies in the longer term. 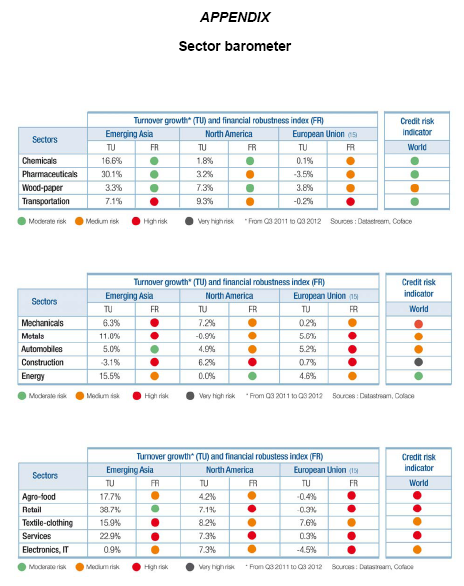