The latest edition of Coface’s annual survey analyses the payment behavior of 256 companies in different sectors of activity. The sample of participants covered is 23% larger than for the 2016 edition and includes more export companies.

"With economic activity showing a marked upturn in the first half of 2017, these extended payment periods appear paradoxical. The economic slowdown in 2016 may provide part of the explanation for this. The almost three-point fall in growth and contraction of over 10% in agricultural GNP had repercussions on business activity which seem to have persisted into the first quarter of 2017. Corporate insolvencies[1] increased by 15% on a sliding annual average over the same period, with the peak being observed between December 2016 and January 2017. This also corresponds to the period of heightened political uncertainty linked to the 5-month vacuum in government.

Nevertheless, the economic slowdown is not the only possible explanation. The lack of liquid assets and access to business financing could also be contributing factors to these extended payment deadlines. The number of respondents whose cash flow situations have degenerated over the past six months is higher (43% compared to 37% in 2016). The proportion of companies reporting difficult cash flow situations is also on the rise. There are more and more companies protecting themselves against credit risks, with 57% having recourse to professionals, compared to 43% in 2016," said Sofia Tozy, Coface economist in charge of the North Africa region.

Marked extension of payment periods, particularly in construction and retail

An increase in late payments of 120 days

Despite deteriorations in client payments, 83% of companies do not apply late penalties when faced with payment defaults from clients. 36% prefer to aim for an amicable settlement, while 30% opt to stop deliveries.

For export companies, it would appear that late payments from overseas are mainly concentrated in sub-Saharan African countries (27%) and Europe (22%).

Despite the extended payment periods in the first half of 2017, companies are not expecting further deterioration. Over half of the respondents hope to see a stabilization in payment behavior and only 25% anticipate any deterioration. 23.8% predict an improvement in late payments and 16% envisage shorter payment periods. Of those sectors that expect an improvement in payment periods, the chemicals and energy sectors are particularly optimistic, as are construction and retail.

Nevertheless, globally, Moroccan companies remain pessimistic over developments in the business climate, despite the implementation of a new regulatory framework on payment practices. They are relatively positive concerning developments in the economic situation over the months ahead. This is demonstrated by the fact that 30% expect an improvement in the economic situation, while 42% anticipate no change.

[1] The various surveys conducted by Coface both in Morocco and in other countries and regions (Asia, Poland, Germany and UAE) have revealed that certain sectors of activity, on account of constraints specific to the nature of the sector or the type of product, have generally longer payment periods (construction), whereas others have relatively short payment periods (services) 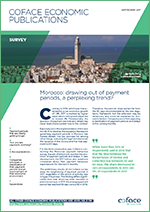