Is India’s Economic Revival Thanks to the Modi Government?

In May 2015, the IMF highlighted India as “one of the bright spots in the global economy,” mainly due to more effective policies and the end of political uncertainty. A Coface report on India forecasts the country’s GDP growth to reach 7.5%. But to what extent have Modi’s reforms contributed to the recent pickup in growth? Are the improvements in the economy without risks?

In May 2014, following five weeks of legislative elections, India’s Bharatiya Janata Party (BJP) leader, Narendra Modi, became Prime Minister. Elected without the need for allies, this is the country’s first non-coalition government in 25 years. Known to be pro-business, Mr. Modi has instilled hopes for reforms in a country where bureaucratic impediments and poor infrastructure have constrained private and public investments for years. After only one year in power, the Modi administration has already initiated major measures, such as the Goods and Services Tax bill which is expected to boost growth and fiscal revenues, as well as the increases in the foreign direct investment ceiling in several sectors.

Over the past year, the Indian economy has benefitted from rising confidence, as illustrated by the growth in foreign direct investment (FDI) shown in Chart 1. The new government has passed legislation to allow full foreign ownership of railway infrastructures and construction companies in order to boost the development of infrastructures and manufacturing. It has also raised the FDI ceiling for insurance and defense from 26% to 49%. The PM’s reform program should aid progressive recovery. The fact that inflation is now under control allows gradual monetary easing.

“Since its early days in office, the government has initiated a reformist program aimed at reviving investments and alleviating supply-side constraints, with fiscal consolidation remaining a priority. The government is benefitting from the favorable macroeconomic situation, with low oil prices and inflation under control, which allows monetary easing,” saidCharlie Carre, Coface’s economist for Emerging Asia.“It is worth noting that private investment is still below potential and investment’s contribution to GDP remains weak. This is due to corporate debt reduction, stalled projects and global uncertainty.”

Even so, according to the OCDE’s FDI index, India still has important statutory restrictions on FDIs.  The Modi government’s actions have helped to restore investor confidence, but barriers to FDI are still substantial. Many sectors are capped and/or require central government approval.

Outlook for Steel and IT Sectors

With India determined to move forward and increase competitiveness as a manufacturer, the construction sector will benefit from the robust demand generated by the country’s infrastructure plans. These wide-spread infrastructure investments will stimulate demand for materials including, but not limited to, steel.

According to the India Brand Equity Foundation (IBEF), India’s IT services are estimated to account for some 52% of the global market share.  Its relatively low labor cost, at roughly a quarter to one-third of that in the US, is a significant contributing factor to the industry. “While the IT services sector will continue to be competitive globally as long as wages are not raised substantially overnight, upcoming challenges from China, Malaysia and the Philippines should not be ignored.” said Tung.

The victory of Narendra Modi as Prime Minister and the economic reforms introduced by his government have served to boost investor confidence. Recent policy measures, such as the easing of land acquisition requirements by ordinance, are helping to ease supply-side constraints but further reforms are required to support much-needed investment and growth. The Modi administration has demonstrated its strong intent to fulfil its promises. The reforms initiated, along with the “Make in India” program, will help the country’s infrastructure and steel sector in the medium-term, while the IT sector will enjoy governmental support (notably through lowered withholding tax rates for royalties) in order to face upcoming challenges.

Nevertheless, the government may face protests from civil societies and the BJP still lacks a majority in the Upper House of Parliament, as it controls only 13 of the 29 states and two union territories. This means that potential problems with policy implementation can be considered as a major downside risk to India’s rebound. The government may face fierce opposition in the Upper House, which could force Mr. Modi to postpone bills or use executive orders. Finally the BJP government has benefited from an externally favorable macroeconomic environment, thanks to low crude oil prices and a gradual recovery in the European Union. The remaining global uncertainties are mostly potential surprises in US Fed tightening. 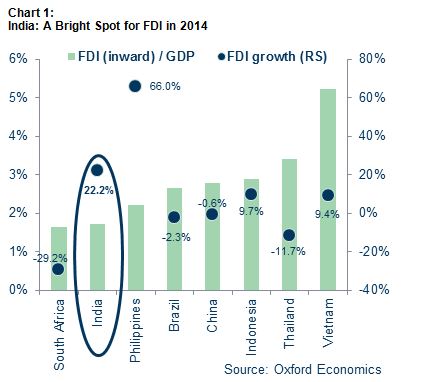