Coface’s results for the first half of 2012

"In a deteriorated economic context, Coface has been able both to pursue its growth and support its clients through refined management of risk. Our performance in the first half of 2012 confirms the relevancy of our strategy to refocus on credit insurance,” declared Jean-Marc Pillu, Chief Executive Officer of Coface.

The Group’s turnover in the first half of 2012 reached €808 million. This increase of 5.8% compared with the same period during the previous year is again due to the sharp increase (7.2%) in turnover from the core business of insurance. The increased financial autonomy of factoring results in a deliberate temporary reduction in financing in relation to this business, explaining the 14.3% fall in net banking profit.
Coface confirmed its expansion in high-potential markets, with double-digit growth in Asia and Pacific (+22.7%), Latin America (+29.6%), North America (+24.7%) and Central Europe (+14.4%). In total, these four regions now account for more than 30% of its premiums, compared with 27% in the first half of 2011. In its traditional markets, essentially European, the increase in turnover was less pronounced due to a slowdown in activity among insured parties, particularly in Northern Europe but also in Western Europe. 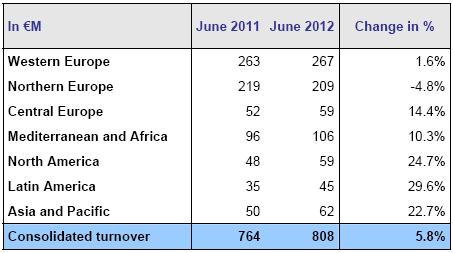 During the first half of 2012, a securitisation program was launched in Germany. This €1.1 billion project significantly increased the market financing contribution from factoring, which rose from 13% at 31 December 2011 to 48% at 30 June 2012. Coface will pursue its plan to increase its financial autonomy during the second half of 2012.

The increase in net profit helped strengthen Coface shareholders’ equity, which reached €1.537 billion at 30 June 2012 – up 5% compared to 31 December 2011. The debt ratio remained almost zero at 30 June 2012 (0.1%).
The ratings assigned to Coface by Fitch (AA- with a stable outlook) and by Moody’s (A2 with a stable outlook) have been confirmed, reflecting the Group’s solid financial profile.

The Group continues to meet its commitments to profitable and autonomous growth, as demonstrated by the solid performance in the first half of the year, despite the difficult economic climate. Although the crisis threatens to continue in Europe, Coface’s new model will maintain financial solidity and commercial dynamism for the benefit of its clients.