Net Income of €126M and Proposed Dividend Stable at €0.48 per Share

Unless otherwise stated, variations are expressed in comparison with results as of December 31, 2014.

Published results for 2014 have been restated to take into account the impact of IFRIC 21.

The annual results 2014 restated from IFRIC 21 are equivalent to those published in 2014.

At the end of 2015, a year marked by a deterioration in the global economic environment, Coface recorded a slight increase in net income (group share), at €126M (€125M in 2014). Revenue for the year grew by 3.4% (+1.2% at constant scope and exchange rate), supported by emerging markets. The Group’s loss ratio net of reinsurance has stabilized over the last six months, at 52.5%. Coface is prepared for Solvency II, which came into force on January1, 2016. The ratio of capital required to cover subscribed risks stands at 147%7, a level in line with Coface’s risk appetite and dividend pay-out policy of 60% of net income. On the basis of its net income per share, stable at €0.80, the Group has proposed a dividend5 of €0.48 per share.

The Board of Directors of COFACE SA examined the consolidated financial statements for FY 2015 during its meeting on February 9, 2016. These were subject to review by the Audit Committee. Financial statements are non-audited and being certified. 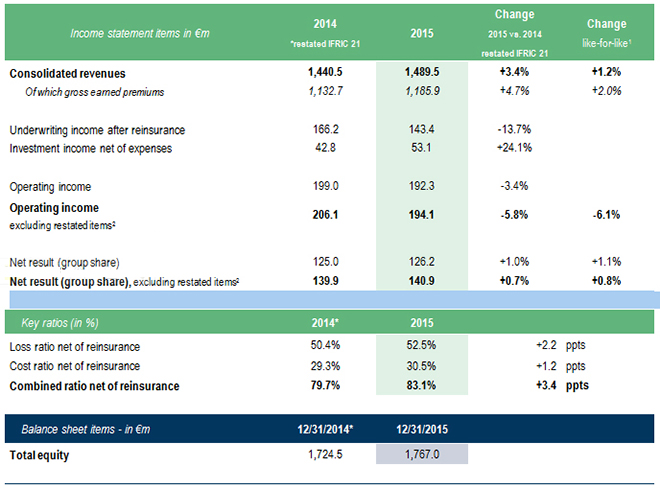 *Published results for 2014 have been restated to take into account the impact of IFRIC 21.

The annual results 2014 restated from IFRIC 21 are equivalent to those published in 2014.

5 Distribution subject to approval by the Annual General Meeting of Shareholders on May 19, 2016.