Global credit insurer Coface recently reviewed the economic situation in 45 African countries, finding 13 growing economies despite the fall in world commodity prices, and three economies that have the ingredients needed for dynamic growth in both the short and long-term.

An exceptional combination of positive factors has helped accelerate growth in Africa, at a rate of about 5% per year on average since 2008. These factors include structural adjustment linked to the relatively low per capita income, high foreign investment, a more stable political environment and numerous debt cancellations. The upturn was also boosted by the high prices of commodities on which the region is highly dependent. Fuels (mainly oil) account for 53% of sub-Saharan export sales, well ahead of ores, metals and gemstones (17%) and food products and agricultural commodities (11%). For some countries, such as Nigeria, Chad, Equatorial Guinea and Angola, the proportion of fuels within export sales is 60% to 100%.

The region has been weakened by the magnitude and longevity of the fall in commodity prices. The situation varies between countries, depending on whether they are net exporters of non-renewable resources (crude oil and base metals in free fall) or net exporters of renewable resources (food and agricultural commodities, for which the fall in prices is limited). Of the 45 countries reviewed (see Appendix), Coface has identified 13 relatively unaffected countries: Ethiopia, Sao Tome, Uganda, Malawi, Cape Verde, Kenya, Burundi, Seychelles, Central African Republic, Mauritius, Tanzania, Swaziland, and Togo. In these countries, the fall in export prices is less than that of their imported products.

To take the review of long-term risks a step further, Coface economists also looked at economic diversification, which reduces vulnerability, supports long-term growth and enhances resilience to external impacts. Only three countries have a satisfactory degree of economic diversification, without being penalized in the short term by lower commodity prices. These are Ethiopia, Uganda and Kenya. Recent figures confirm their potential for dynamic growth, with the growth in GDP reaching nearly 7% on average in 2014, comparable to that of China.

"However, this positive observation and the region’s undeniable potential do not mean the total absence of risk. Political stability in the region is fragile. The lack of infrastructure is also a known vulnerability, as are the high current account deficit and increasing public debt levels," warned Julien Marcilly, Chief Economist of Coface. 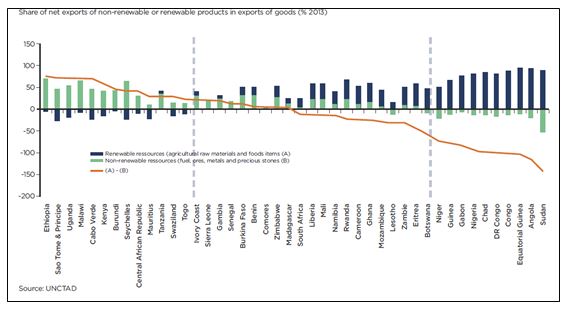