Global credit insurer Coface reports in its latest economic Panorama that economic activity is gaining strength in the Middle East and North Africa region. Growth is expected to stand at 2.6% in 2014 and accelerate to 3.2% in 2015 on the back of global economic recovery and preliminary signs of political consensus in some countries of the region. However, growth rates will remain below the 2000-2010 average of 5.4%.

The Panorama also takes an in-depth look at the hydrocarbon and textile sectors in these regions. 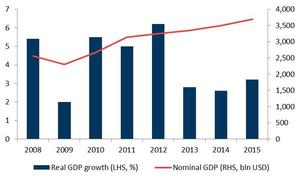 economic growth in the region on the back of robust non-hydrocarbon activities and large budget surpluses. Overall in GCC countries, the share of the hydrocarbon sector’s contribution to GDP declined from 41% in 2000 to 33% in 2014. These countries also benefit from solid financial fundamentals such as huge assets in their sovereign wealth funds and external surpluses. However the sharp decline in oil prices will weigh on growth performances and fiscal balances in 2015.

On the oil importers (Egypt, Jordan, Lebanon, Morocco, Tunisia) side, the recovery in tourism, investor confidence and exports, supported by the recovery in European countries, are expected to contribute positively to growth. Many oil importing countries have announced stimulus packages to support economic activity in the aftermath of social unrests. Oil importers are expected to grow 2.5% in 2014 and 3.4% in 2015. Even though these countries suffer from high unemployment, budget and current account deficits, and high public debt levels, the situation is expected to improve due to the recovery in economic activity and incentive reforms. 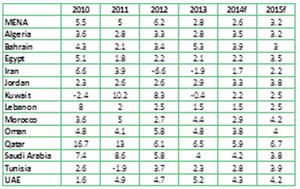 The regional turmoil will weigh heavily on the economic performance Iraq and Libya, which are expected to contract 2.5% and 19.8% respectively in 2014.

“The divergence between the oil exporters and oil importers persists and the real growth rates remain below the 2000-2010 average for both groups. Nevertheless, most of the GCC countries were able to stay out of the geopolitical tensions, allowing them to continue to attract foreign investments and record solid growth rates. They continue to invest heavily in non-oil sectors to transform their economies. This also reduces their vulnerability to a sharp decline in energy prices. As such, Coface’s business environment assessments are better in these countries. But there are still some challenges that need to be addressed regarding future deterioration of fiscal balances, high level of bureaucracy and improvement of transparency,” said Saltem Iyigun, Coface Economist for the Middle East and North Africa regions.

“The impact of the social and political turmoil was heavier for oil importers. They still suffer from political uncertainties, high unemployment and public debt, deficit of current account balance and fiscal imbalances. However these countries are also making some progress in terms of structural reforms to improve fiscal performance, labor market conditions and

business environment. Tunisia and Morocco are expected to have better economic performance due to the economic recovery in Europe,” continued Iyigun.

The GCC is an oil-based region and possesses the largest proven reserves in the world. Kuwait, Qatar, Saudi Arabia and the United Arab Emirates represented nearly 41% of the Organization of Petroleum Exporting Countries (OPEC) proven crude oil reserves at the end of 2013. This sector is the major source of exports and budget revenues for the GCC countries. Hydrocarbon revenues also provide the necessary funding for the development of other industries, but declining oil prices may result in a revenue slide. It may also play against the investor confidence for some projects through the squeeze of corporate profit margins.

Textiles: Recovery after the instability

The textile and apparel sectors are one of the traditional industries in the North African countries as it provides an important part of employment and industrial production. In Morocco, the textile sector is the largest employer of the industrial workforce at 40%. The sector accounts for 10% of GDP and 20% of exports. In Tunisia, the textile and clothing sector is the second largest exporter in the manufacturing industries as it accounts for 19% of the total export of the country. The sector provided 7% of the total employment in the first quarter of 2014. The concentration of textile exports to European countries, the bargaining power of the clients over the producers, limited access to financing and political instability constitute the main risks in this sector.