- Q2-2017 turnover up 1.2% on a comparable basis
- +2.1% in mature markets for the quarter, driven by insured clients’ turnover
- Contraction eased in emerging markets

Unless otherwise stated, changes are in comparison with H1-2016
1 Constant perimeter = excluding State Export Guarantees Management (€25.7m revenues in H1-2016).
Coface ceded this activity as of 1 January 2017; 2016 figures impacted by this activity have been restated so as to be comparable to 2017
2 The estimated Solvency ratio disclosed in this presentation is a preliminary calculation based on the interpretation by Coface of Solvency II.
Final calculation could result in a different Solvency ratio. The estimated Solvency ratio is not audited.

“The effect of measures taken under the Fit to Win plan continue to materialize in what is now a more favourable economic environment. In the second quarter of 2017 we generated net profit of €12.9m, thanks to our continued loss ratio improvement, particularly in the Asia Pacific zone where losses have reached their lowest levels in a year. We achieved €5.4m savings in the framework of our operational efficiency plan and are in line with our full year cost savings objective of €10m. Finally, Coface’s turnover rose 1.2% in the second quarter, benefiting from our clients’ increased turnover levels and a turnaround in mature markets. These elements enable us to revise our net loss ratio guidance for the year from below 61% to below 58%. We continue to focus on executing the strategic plan presented in 2016.” 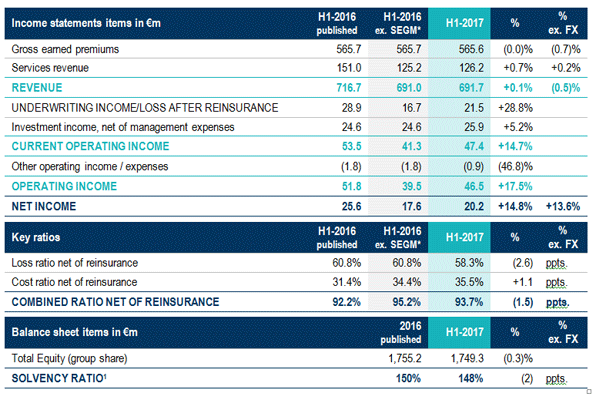 Coface registered turnover of €691.7m in H1-2017, up 0.1% compared with H1-2016 and down (0.5)% at constant FX. These figures have been adjusted for the transfer of the French State export guarantees management which took place at the end of 2016. This activity therefore had no impact on turnover in H1-2017.

In H1-2017, premium volumes benefited from an upturn in Coface’s client turnover (+2.7%) against the backdrop of a modest but generalised economic improvement. As in Q1-2017, growth in insured companies’ turnover had a positive effect across all regions. Price evolution remained negative, at (1.3)%, but was slightly better in comparison with previous periods, with mature markets continuing to see significant competitive pressure. Prices in Latin America and in Asia continue to increase.

In North America turnover was down by (8.1)% and by (10.8)% at constant FX compared with H1-2016, which benefited from several large deals in H1-2016 that were not repeated this year. The Group also cancelled unprofitable contracts in Canada.

In Central and Eastern Europe turnover was +2.4% and 0.0% at constant FX. Commercial performance in this region remains very positive, but was offset by prior year premium adjustments in Poland and renewed price decline in Austria.

In the Mediterranean & Africa region premiums grew by 5.0% excluding FX thanks to the continued good commercial momentum in the region, driven by Italy and Spain.

Emerging market performance continued to vary widely. Turnover in Latin America grew by 7.5% (and by 2.9% at constant FX), slowing in comparison with previous periods, as the Group has been prudent in Mexico. In Asia, the decline remained significant but showed gradual improvement, at (7.7)% and (10.5)% at constant FX, with the bulk of the impact of risk action plans now behind us.

New business production for H1-2017, at €71m, was down €11m compared with H1-2016. However, new production in mature markets grew, with the exception of Germany. Emerging markets remained affected by prudent underwriting in certain countries e.g. Mexico and Turkey. Finally, Coface’s client retention rate reached 91.0%, its highest level for the last 4 years.

Gross loss ratio in H1-2017 was 56.0%, an improvement of 5.9 points compared with H1-2016 (61.9%), driven mainly by Asia, which registered its lowest gross loss ratio for the past year at 61.5% in Q2-2017. The improvement observed in North America in Q1-2017 was confirmed. This was partially offset by the increased loss ratio in Western Europe which remained nonetheless at a very good level (51.1% in Q2-2017).
The Group’s net loss ratio for H1-2017, at 58.3%, was almost stable compared with the previous quarter (58.2% in Q1 2017). This apparent stability masks a significant underlying improvement: Q1-2017 benefited from a positive FX effect, which lowered the published loss ratio by 2.1%. This effect almost wholly reversed in Q2-2017. Excluding FX, the net loss ratio therefore improved by 4.8 points compared to the previous quarter, to reach 55.5%, reflecting better gross ratios.
Given H1-2017 results, Coface is setting improved net loss ratio guidance for the full year, at below 58%. This represents an improvement of 3 points compared with previous guidance. The more favorable economic climate which amplifies the impact of Fit to Win initiatives, enables a more rapid than anticipated improvement in results.

Coface continues to execute its operational efficiency programme. Savings achieved over H1-2017 amounted to €5.4m, enabling the Group to re-affirm its cost savings objective of €10m for the full year.
The Group’s cost ratio after reinsurance stood at 35.5% in H1-2017. During the course of Q2-2017 the Group registered a one-off fiscal charge of €6m (Italy) which increased its net cost ratio by 1.4 point in H1-2017.

Coface continues to implement its strategic plan, Fit to Win.

Given H1-2017 results, Coface is setting improved net loss ratio guidance for the full year, at “below 58%”. This represents an improvement of 3 points compared with previous guidance. The more favorable economic climate which amplifies the impact of Fit to Win initiatives, enables a more rapid than anticipated improvement in results.

The Group is confident it will achieve its €10m cost savings target in 2017, while investments and restructuring charges for the year are expected to amount to €21m. 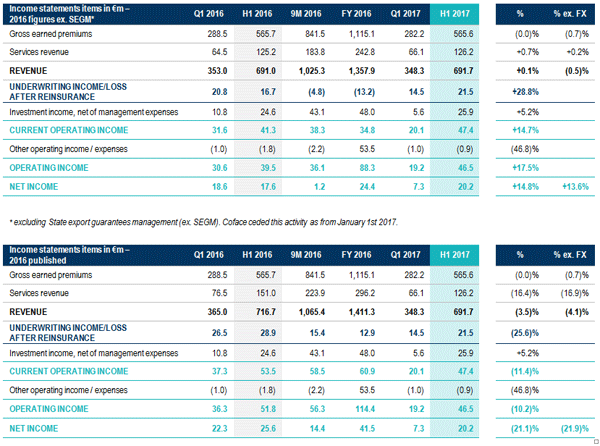 FINANCIAL INFORMATION
This press release, as well as Coface SA’s integral regulatory information, can be found on the Group’s website: http://www.coface.com/Investors

For regulated information on Alternative Performance Measures (APM),
please refer to our Interim Financial Report for S1-2017 and our 2016 Registration Document.